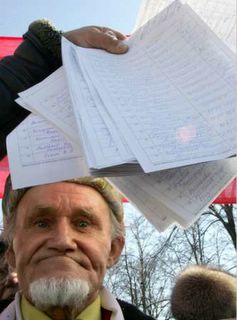 The Bashkortostan Opposition flew to Moscow today to protest their president. The protesters want President Rakhimov to resign:

Roughly 200 activists planned to deliver a petition to the Kremlin that they claim carries 100,000-plus signatures. Opponents accuse Rakhimov of human rights abuses and corruption.

The group has official permission to hold a demonstration today outside the Moscow headquarters of the Federal Security Service.

Bashkortostan’s opposition plans to erect a tent city near the presidential-administration building in Ufa on 1 May as part of its continuing campaign of protests.

Even in Moscow they are talking about new leadership in Bashkortostan:

In Bashkortostan, the long and painful process of a change in ruling elites is underway, which began when the Kremlin gave Murtaza Rakhimov a helping hand in getting re-elected in 2003. Tensions among the various political elites in the republic are increasing, and tearing not only through the government but also through Rakhimov’s own family. Blagoveshchensk, a small town in the republic where police beat and arrested dozens of innocent people, is a ticking time bomb of a scandal. It would be truly surprising if the republic’s Interior Minister Rafael Didayev, who had overstayed his welcome anyway, were to be the only official to suffer as a result.

And, Russian News had more to say about the protest today in Lubyanka Square in Moscow:

The protests of the opposition in Bashkortostan, a republic in Russia’s Volga Federal District, have gone national. Protesters will stage a rally in Moscow April 7 to demand the dismissal of the republic’s president, Murtaza Rakhimov, and that the federal authorities intervene in the situation, Gazeta.ru reports.

Until now, local residents had preferred to settle accounts with regional leaders in administrative capitals.

About 150 protesters will board a chartered Boeing bound for Moscow early on April 7. Selected activists from nine Russian political parties and representatives of about 30 public organizations will head toward Lubyanka Square, where a monument to the victims of Soviet political repressions is located. They will stand there from 11.00 a.m. and until 6.00 p.m. holding posters and demanding Rakhimov’s resignation.

The rally will take place under the slogan: “Bashkortostan is a political Gulag.” The republic’s incumbent authorities are guilty of comprehensive violations of human rights and freedoms, the rally’s organizers said. The protesters will submit a petition calling for Rakhimov’s resignation to the presidential administration after the rally. A total of 117,000 signatures have already been collected. Moreover, “orange” protesters, who chose the color because of its post-Ukraine significance, have already reached an agreement to talk with some State Duma deputies. Representatives from the Communist, Liberal Democratic and Homeland factions are expected to support the rally.