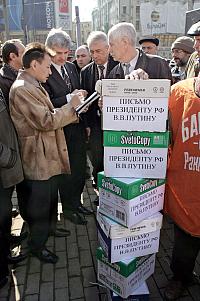 Dilmukhametov, Bignov and Russian leader Anatoly Dubovsky with boxes of signatures at a rally Thursday

More on the Bashkortostan rally in Moscow demanding the Bashkor president to resign:

Advocates of human rights from Bashkortostan have gathered at a commemoration stone to victims of Stalinist repressions in Lubyanka square in Moscow on Thursday, demanding the resignation of Bashkortostan President Murtaza Rakhimov. Around 200 protesters with flags and slogans in their hands turned up. Some of them have prisoner overalls on.

The protest act authorized by the Moscow city authorities was to begin at 3.00 p.m., but was postponed because a flight from Ufa that carried the protesters to Moscow was delayed.

A 65-strong police cordon is ensuring law and order on the scene: the situation is normal, no incidents have been reported.

Protesters tell of their difficulties in Kortostan:

Some 200 opposition activists flew in from Ufa on Thursday to demand the ouster of Bashkortostan President Murtaza Rakhimov at a rally on Lubyanskaya Ploshchad. Some protesters warned that brewing unrest could prompt a popular revolt like the one that recently toppled the president of Kyrgyzstan.

Political analysts, however, expressed doubt that the protests would turn violent and overthrow Rakhimov.

“It is impossible to live there,” said protester Ferdaus Mukhamatdinov.

After the rally, protesters delivered the boxes of signatures to a presidential administration office just off Lubyanskaya Ploshchad.

Airat Dilmukhametov, leader of the opposition Bashkir National Movement, warned that protest actions would grow if Putin did not dismiss Rakhimov.

The protesters aim to keep within legal bounds:

Bashkortostan is an oil- and gas-rich autonomy in the plainlands along the Volga. President Murtaza Rakhimov has been ruling it with a fist of iron for fifteen years. Now, Bashkir opposition is firmly determined to make him step down.

“Georgia, Ukraine, Kyrgyzstan. Bashkortostan may well be the site of another revolution-but we shall keep strictly within legal bounds,” Ramil Bignov, Bashkir opposition Coordination Council chief, said to a news conference that had gathered the republic’s opposition leaders in Moscow today.

The protest action they are launching aims mainly to attract federal authorities’ attention to Bashkir problems, pointed out the speakers.

The Bashkir presidential staff premises will be picketed indefinitely, starting May 1. The pickets intend to pitch a shantytown in front of the building, announced united opposition leaders.