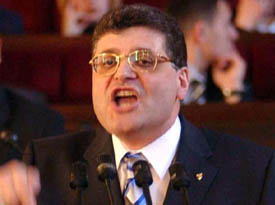 Aram Karapretian, the Maverick Opposition Candidate in Armenia ran into more challenges yesterday when his political rally was disrupted by “thugs”:

Aram Karapetian, a maverick opposition politician who has vowed to stage a “revolution” in Armenia, blamed on Thursday an unspecified “government wing” for violence that disrupted his rally in the central town of Sevan on Wednesday.

The incident was condemned as an anti-democratic “provocation” by two major Armenian parties, including the governing Armenian Revolutionary Federation (Dashnaktsutyun).

The rally, attended by about 1,000 people, descended into chaos after some participants angrily took issue with Karapetian’s pledge to effect regime change in Armenia.

“Mr. Karapetian, where have you been in those years?” one of them, who identified himself as a veteran of the Nagorno-Karabakh war, asked. “We were building a state while you were making money.”

“What do you want now? What revolution are you talking about?” he added before threatening to “cut your ears.”

Karapetian told the crowd to remove the man from the square and scuffles between various groups of people followed. At least one person was hospitalized as a result.

Speaking at a news conference the next day, Karapetian refused to name forces which he believe orchestrated the “provocation.” “Very bad processes are going on in the Armenian political arena,” he said. “Everyone talks about democracy. But during every democratic process armed gangs are sent into action.”

Karapetian ran into problems earlier in his campaign when he was accused of being from a different district:

The famous “Izvestia” published information according to which the candidate for the presidency of RA Aram Karapetian is a citizen of RF. To comment on this information we turned to Hayk Baboukhanian, chief of the staff and NA deputy. He claimed that this disinformation can’t damage Aram Karapetian as all the necessary documents had already been represented; one should always be ready to face disinformation, falsification during the pre-electoral campaign. Mr. Baboukhanian thinks that this news has been published in the Russian press not by chance. It has been done on purpose.