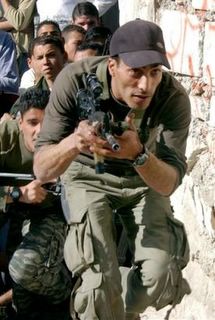 The Associated Press came out with more pictures today of terrorists stalking a Jewish soldier in the West Bank. (Notice the children in the background… what a sick society!) Maybe this photographer is hoping to get a Pulitzer Prize like his comrade did last year for his pictures of a terrorist execution in Iraq.

Here is what the AP said of this photo:

Palestinian gunmen from the Al Aqsa Martyrs Brigades take up positions during an Israeli army incursion in the West Bank city of Nablus, Monday April 11, 2005. Israeli soldiers in a dozen army jeeps raided several homes and interrogated male residents Monday. Dozens of children and young teenagers threw sticks and stones at the jeeps as they left town and soldiers fired rubber bullets and tear gas. There was no direct exchange of fire between the army and the gunmen.(AP Photos/Nasser Ishtayeh).

When did “terrorists” become “gunmen”?

I saw this article earlier on LGF but was surprised to see it right there in todays AP slide show of the Bush-Sharon meeting.