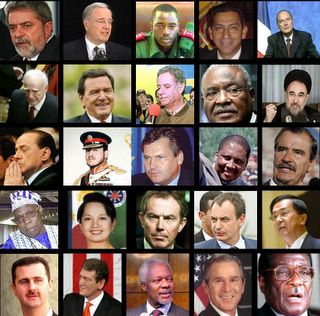 Please, click on photo to enlarge. It is worth it.
Papal Funeral Attendees :

George W. Bush (the first sitting president to attend a papal funeral)- “I think John Paul II will have a clear legacy of peace, compassion and a strong legacy of setting a clear moral tone,” Bush told reporters on Air Force One as he flew from Rome to the United States just hours after the funeral. He said he wanted to amend his remarks to add the word “excellent.”

The Uniter of Man is Laid to Rest…

Applause rang out in the wind-whipped St Peter’s Square as John Paul’s plain cypress coffin, adorned with a cross and an “M” for the Virgin Mary, was brought out from St. Peter’s Basilica (search) and placed on a carpet in front of the altar. The book of the Gospel was placed on the coffin and the wind lifted the pages.

Nearly 1 million people prayed in a Polish field, North Americans slipped into pews before dawn and Asians gathered by the thousands at outdoor Masses in a global goodbye to the pope.

Update: Bizblogger talks more about the situation for Christians in commmunist China.

Update 2: Drudge has more on the world communitiy coming together at the funeral.