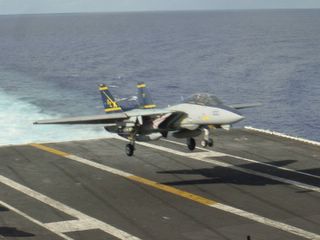 Another Successful Landing on the Truman

Naval Security reviewed it’s procedures after a South African man was found walking around the deck of the USS Harry S. Truman:

A review of security at a major UK naval base has been carried out after an alleged intruder was found on board a visiting US aircraft carrier, the Royal Navy said today.

The alleged trespasser was discovered on board the USS Harry S Truman, anchored off Stokes Bay, Gosport, Hants, on Saturday night during a week-long visit to Portsmouth Naval Base.

A navy spokesman said the man had allegedly passed through both Royal Navy security and US Navy security to get on board passenger boats used to ferry crew back and forth from the visiting warship.

It is understood that the man’s identity was not checked by the Royal Navy security guards – as the base’s rules dictate – with the responsibility being left to the US guards on duty at the gate.

The spokesman added that a thorough review of security had been carried out at the naval base since the incident and a number of changes implemented.

Thank you Navy Specialist Sha’ron Evans, YN2(VS22) on the USS Harry S. Truman for the photo and the security article and to all of you who are serving in the military.
Be Safe!