My word! I believe this qualifies as “Gay Bashing”!

That was the punishment handed down in Saudi Arabia for a group of men accused of dancing like women:

More than 100 young men caught dancing and “behaving like women” at a private party were sentenced this month to a total of 14,200 lashes, after a trial behind closed doors and without defense lawyers. The men were also given jail sentences of up to two years. 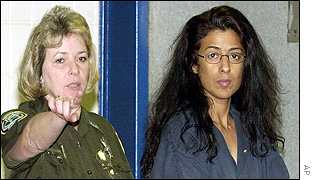 The Little Princess before She was Deported

The Saudi Institute is also reporting on the raid on the gay party in Saudi Arabia and the sentencing of gays:

On 14 of March, 110 Saudi men were arrested in Jeddah attending a gay wedding party for the two men. Homosexuality is illegal in Saudi Arabia and is punished by jail, torture and at times death. Although homosexuality is illegal in Saudi Arabia, several members of the ruling tribe are gays, such as Princess Buniah Bint Saud bin AbdulAziz AlSaud , the cousin of Saudi Ambassador Bandar Sultan. She was arrested in 2001 in Florida for abusing her Indonesian maid and later deported.

The FrontPage article also tells of the beheading of homosexuals:

…in January 2002 that three men in the southern city of Abha had been “beheaded for homosexuality”.

Update: (1:00 PM) ‘The Great One’, Glenn Reynolds, at Instapundit has just linked to this post.