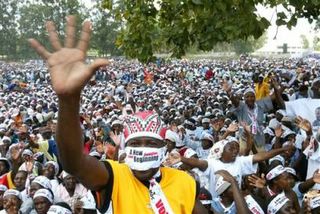 I noted earlier about the unlikely event of a fair election in Zimbabwe. It’s not only hard to beat a guy who is giving away laptops for votes but what even makes it more difficult is how this guy works at keeping his job.

The Opposition in Zimbabwe is gearing up for Thursday’s parliament elections: 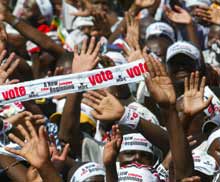 An estimated 30,000 supporters of the opposition Movement for Democratic Change attended Sunday’s rally.

MDC leader Morgan Tsvangirai appealed to Zimbabweans to vote for his party to bring to an end what he called 25 years of misrule by President Robert Mugabe’s ZANU-PF party. Mr. Tsvangirai said, although President Mugabe played a crucial role in Zimbabwe’s liberation struggle against colonial rule, his image is now tainted.

Morgan Tsvangirai, leader of the MDC, said he would jail Mugabe’s inner circle.

Tsvangirai said that he would also jail Mugabe’s inner cirle:

Morgan Tsvangirai, leader of the opposition Movement for
Democratic Change, told a jubilant crowd of 25 000 in the capital that he
would prevail in Thursday’s elections and jail what he called the corrupt
elite surrounding President Robert Mugabe.

A Catholic Arch Bishop urges a revolt to remove Mugabe:

A senior Zimbabwean clergyman has issued an unprecedented plea for a peaceful Ukraine-style “popular mass uprising” to remove President Robert Mugabe after elections this week.

The highly respected Catholic Archbishop of Bulawayo, the Most Rev Pius Ncube, said that the parliamentary elections on Thursday were certain to be rigged. “I hope that people get so disillusioned that people really organise against this government and kick him [Mr Mugabe] out by non- violent popular mass uprising,” said Archbishop Ncube. “As it is, people have been too soft with this government. So people should pluck up just a bit of courage and stand up against him and chase him away.”

Fears and expectations of voter fraud:

For most people in Zimbabwe, the general election, to be held this Thursday, has already been lost. The police and the army have been placed in charge of manning the 8,300 polling stations around the country. New, imaginary names have appeared on voter rolls in rural areas, where support for President Robert Mugabe’s Zanu-PF party is strongest. In a remote rural constituency in Mashonaland East, 14,000 new people have registered to vote here since 2002, compared to just 3,600 in the urban Bulawayo South area. The ruling party used to add the names of dead people and children to the voters list – now, it simply fabricates the names.

Update: (Monday) The BBC is reporting that the Zimbabwe government is not too pleased with the Archbishop:

Zimbabwe has called one of its leading clerics an “inveterate liar”, after he called for a peaceful uprising against President Robert Mugabe.