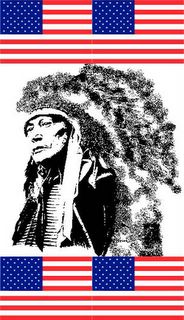 Dr. David Yeagley is one Bad Eagle. He is a contributor to Front Page Magazine where he has written articles from the seldom heard conservative American Indian viewpoint. Today he paints a striking picture about how “real” indians (unlike anything you may have heard from Ward Churchill) have contributed to this great country:

Ward Churchill wants everyone to think that Indians hate America. The truth is Indians love America, more than most people here. Today there are nearly 200,000 living American Indian veterans. That’s nearly one out of eight Indians. Churchill’s fake Indian voice, though loud, is way off-key. Real Indians honor America, and are quick to honor their warriors.

The percentage of Indians in the American military is proportionately higher than that of any other group, and Indians have been fighting for America since the war of 1812. Indians have served in all the major American wars, often without acknowledgement because they weren’t American citizens until 1924, when Congress declared them so. Indians serving in World War I, “the Great War,” served as volunteers.

In 1917, Chief Red Fox Skiuhushu went to Secretary of War Newton D. Baker, and pleaded, “From all over the West we now stand ready­ 50,000 Indians between the ages of seventeen and fifty-five. We beg of you, to give us the right to fight…our hearts could be for no better cause than to fight for the land we love, and for the freedom we share.”

Dr. Yeagley has been busy writing at his own site BadEagle.com commenting on the Ward Churchill story. It is a great website! Dr. Yeagley is also a published scholar, a musician and is on the speakers list of Young Americans Foundation.