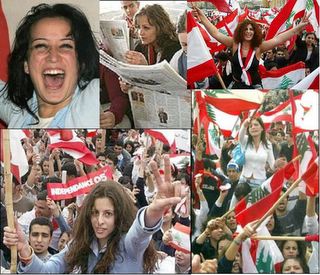 Joy on the Streets!
(you may want to click on the picture to enlarge)

The young people are having the time of their lives in the Lebanese “Red and White” Revolution. Youth lead the Protests in Lebanon:

The flag-waving protesters who transformed the funeral of a former prime minister into a popular uprising that brought down a government are, by and large, the sons and daughters of the ravaged Lebanon the world remembers. They have built a tent city around a statue still riddled with the bullet holes of a civil war they are barely old enough to recall.

“We have DVDs and the Internet to learn about the war,” said 21-year-old protester Joseph Abouyazbek, who ducks out of his tent for several hours each afternoon to attend his hotel-management courses…

Sixteen days after they began, the demonstrations have settled into something of a small and orderly urban Woodstock, swelling to thousands of people on some days and shrinking to hundreds on others. They show few signs of disappearing. On Wednesday they installed a new, larger podium to accommodate more television cameras and a performance space for musicians.

Things die down each morning and kick back up in the evenings with singers, poets and political speakers. The revolution is televised: A 5-foot-tall digital screen is propped above the plaza, providing a constant stream of coverage from Hariri’s Future television network.

As the youth rallies, the Bush Administration puts the pressure on Syria:

President Bush on Wednesday demanded in blunt terms that Syria get out of Lebanon, saying the free world is in agreement that Damascus’ authority over the political affairs of its neighbor must end now.

He applauded the strong message sent to Syria when Secretary of State Condoleezza Rice and French Foreign Minister Michel Barnier held a joint news conference on London on Tuesday.

“Both of them stood up and said loud and clear to Syria, `You get your troops and your secret services out of Lebanon so that good democracy has a chance to flourish,” Bush said.

So the revolution continues without the acts of terrorism that were typical in the region not that long ago. Let us hope it continues this way.