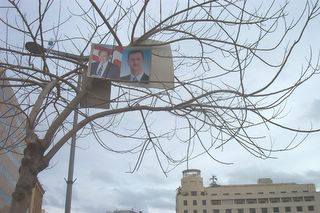 Scene After the Buses Leave Town

Omar from Iraq the Model replies to the Lebanese Rally in support of the Syrian Baathist Regime:

I have noticed that some media sources are focusing on the size of the demonstrations and the number of the people who were gathered to attend at that time and place. I think that the number of participants doesn’t make a demonstration strong at all. The BBC says: The crowd dwarfed previous opposition protests urging Syrian troops to leave.

I see no patriotism at all in holding pictures of another country’s president (err…I mean tyrant) and chanting “Long live Asad…Long live Syria” when that very administration you’re cheering and chanting for has been keeping your country a hostage for over a decade.

Another point is that bringing too many people by buses doesn’t mean that you’re right. Actually it reminds me of demonstrations in Iraq under the Ba’athist regime (Oops, I forgot that the Ba’athists still rule in Syria!)