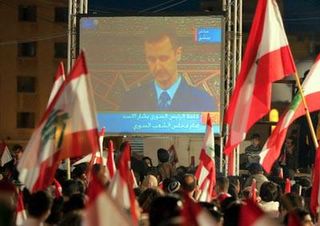 Syrian Leader Assad announced the withdrawal of Syrian troops from Lebanon to the Syrian border on Monday. But, Hizbollah in support of Syria calls for a peaceful rally in Beirut on Tuesday…

The Shi’ite Muslim group, which has the largest following in the country and is the only one with weapons, has in the past steered clear of plunging into internal Lebanese politics or flexing its political muscles against domestic rivals.

The group’s chief Sheikh Hassan Nasrallah warned that Syria’s pullout under intense global pressure could spell chaos for Lebanon and push it toward peace with Israel.

Blogger Amarji (via Instapundit) has the scoop from the Syrian trenches.

…A pivotal week for Lebanon.