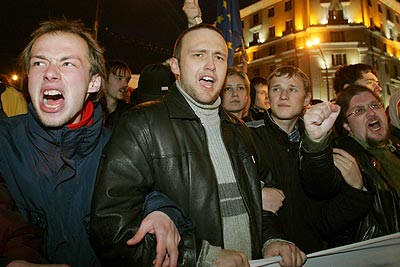 It has been barely 24 hours since the government in Kyrgyzstan collapsed and already news is coming out about a democracy rally in suppressed Belarus. This rally today did not finish on a high note, however:

Several hundred people in the Belarus capital of Minsk have attempted to hold an opposition rally in the city’s central square.

Police have not let them congregate. Law enforcement officials have urged the protestors to leave the scene.

Shumchenko, leader of the social union Perspective, organized a protest rally by Belarus businessmen on March 1. Initially he was sentenced to 10 days of imprisonment. He has been detained further while authorities investigate an incident in which Shumchenko allegedly beat up his cell mate.

Instapundit pointed out this “unsanctioned” rally earlier today and already has some updates. Publius Pundit has been talking about Belarus developments for some time now. 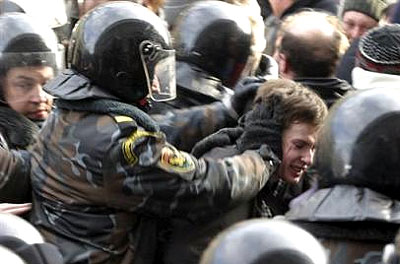 Police Brutally Break Up the Rally

Police Detain 150 Individuals but Many More Are Still Protesting

Belarus police have arrested about 150 members of an unauthorized opposition rally in the center of the capital, Minsk.

All detained are young persons, 16 to 20 years old. They were taken to police offices, Interfax news agency reported.

300 to 400 people still hold a rally in the central Oktyabrskaya square demanding to free political prisoners and protesting against value added tax.

Also, a pastor of the embattled Minsk-based charismatic New Life Church has been fined the equivalent of 30 times the minimum monthly wage in Belarus for organizing religious services without state permission.

This latest rally follows a previous rally on March 1st organized by Shumchenko:

Thousands of market traders massed in the Belarus capital to demand President Alexander Lukashenko’s government resign over a new tax law they say could force many of them out of business.

Up to 5,000 people chanted “Resignation!” and waved banners “Down with the government” and “Down with VAT” in Oktyabrskaya square in the heart of Minsk.

“Our aim today is not a revolution. We just want to work in a normal fashion,” Shumchenko told the crowd.

He must not have been convincing enough for President Alexander Lukashenko since he has been locked up since the rally. 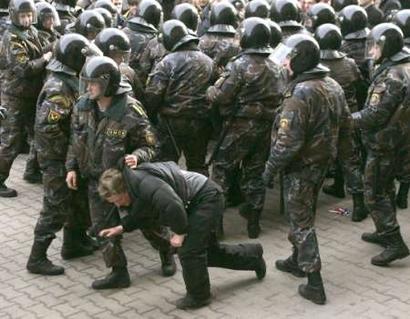 Now, Interfax is reporting that the protesters arrested today will be charged along with the protest organizer:

100 to 150, a maximum of 200, people” got together in the center of Minsk, “were behaving aggressively” and “many” of whom “were in a state of alcoholic intoxication.”

“Conflicts took place, which manifested themselves in ice blocks being hurled at militia [police] personnel. Accidental passersby might have been injured,” Slepchenko said.

He confirmed that well-known opposition activist Andrei Klimov had initiated the procession and said Klimov might be prosecuted as well though he had not been arrested.

It has become a tradition for the Belarussian opposition to hold mass actions on March 25 to mark anniversaries of the foundation in 1918 of the Belarussian People’s Republic. 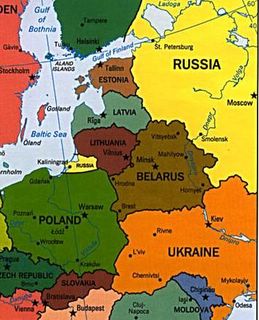 Will Belarus be next?

Update: “Instapundit” (“the man with millions of page views”) has linked to this post.