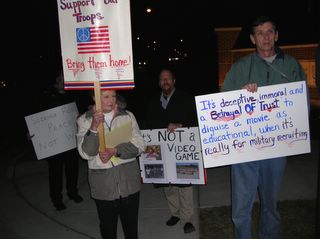 Welcome Extraterrestrials! We are a Peaceful People!

Maybe it’s caused by some migratory pattern with the coming of spring or some exotic mating season but whatever the reason the moonbats will be out in force this weekend in St. Louis. (For more info on moonbats see Michelle Malkin)It all started tonight at the St. Louis Science Center. The center’s IMAX Theatre has decided to open the movie “Fighter Pilot” (Ha!) one day before the second anniversary of the start of the Iraq War. Ouch! Talk about throwing salt into wounds! The lib’s here are spittin’ mad and they’re just not going to take it! Never mind the fact that Iraq has been liberated and Saddam is behind bars and going to trial. Forget those elections in January that were a massive success. Pay no attention to those delegates who met for the first time this week in parliament. Don’t listen to reports of Iraqis marching in the streets demonstrating against terrorism. … Dang it! “Bush Lied” don’t you know?… and we’re not supporting no stinkin’ “Blood for Oil” War! Freedom, My Ass!!

Military recruiting is not meeting its goals but help for the Pentagon is on the way from Boeing. Boeing company has produced a whiz-bang recruiting ad for the U. S. Air Force, an IMAX movie called “Fighter Pilot: Operation Red Flag.” The red flag for local citizens is that this recruiting effort is the new IMAX movie at the St. Louis Science Center.

(And, that’s why we’re here to make it even harder for those recruiters from the military that we support!) 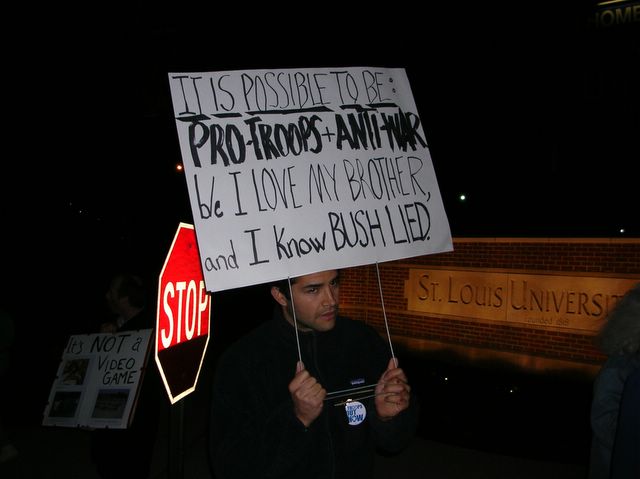 I don’t get it… how does “Pro Troops” & “Antiwar” equate to “Bush Lied”and “I Love my Brother”? Maybe I’m just missing something? I hope he is not a philosophy major. That is like saying, “If A equals B, then C equals a Giraffe!”

WE SUPPORT THE TROOPS BUT NOT THE WAR
We support the troops and hope that they make it home as quickly as possible. We do not support the policies that sent them to Iraq. 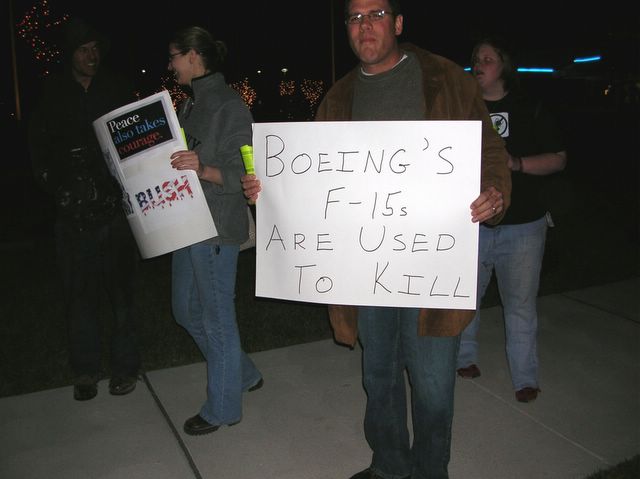 Thanks for clarifying, When they say “F-15 Fighter Jet” now I know what the “Fighter Jet” part means!

(And- On back of flyer they handed out)

BEFORE JOINING THE MILITARY, GET ALL THE FACTS…
See the documentary “Gunner Palace”
Contact Alternatives to Military Service Network

(but, we support the troops!) 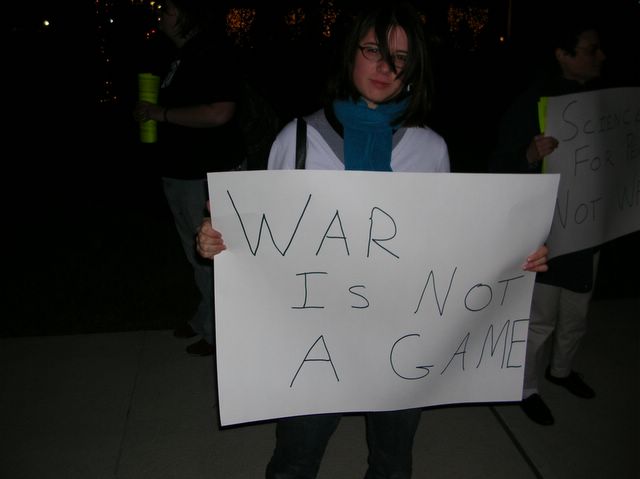 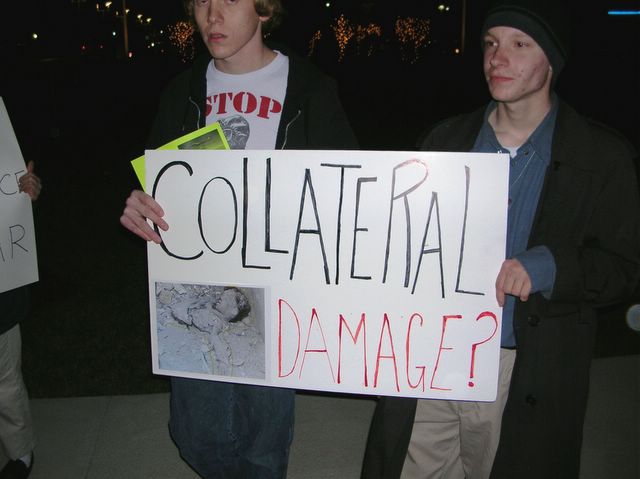 Now, this is quite the contradiction. It looks like a sign you’d see in front of an abortion clinic. Although, I’m placing my bet that these two have not taken part in one of those demonstrations!

Tonight it was the Science Center- Sunday it’s St. Louis Forest Park for the Start of the War Memorial!

Woo-hoo! It’s gonna be a heck of a weekend in St. Louis!