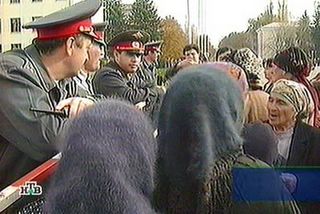 Protests in Another Former Soviet Republic

There was a protest in the former Soviet republic of Ingush over the weekend. The response by President Zyazikov sounds familiar to what we just witnessed in Kyrgyzstan:

“This is a provocation fanned by some media outlets. Certain individuals are seeking to bring instability in southern Russia. That’s the problem,” President Zyazikov said in a RIA Novosti interview.

The president denied reports that he was absent from his office.

“Reports are being spread that the president has left the republic… I am not going to resign, and I will not allow to turn the republic into a hot spot and a hotbed of instability. Nothing of the kind will happen here,” said President Zyazikov.

Zyazikov said the republic did not need reinforcements to ensure its security. “There are no and there won’t be any armored vehicles or any additional troops here. There is no need in them,” said the president.

Aljazzeera is reporting on the rally:

A protest rally in the mainly Muslim southern Russian republic of Ingushetia has demanded that the region’s Kremlin-backed leader step down, police officials say.

The protesters, numbering about 500, were also demanding that the central government in Moscow redraw the boundaries between Ingushetia and the neighbouring North Ossetia – a predominantly Orthodox Christian republic – to return territory that previously belonged to the Ingush.

The rally in the republic’s main city, Nazran, organised by a non-governmental organisation, was not authorised by the authorities, said Roman Schekotin, spokesman for the Interior Ministry’s branch in southern Russia

Opposition leader Boris Arsamakov was detained by police in Nazran, in Russia’s southern republic of Ingushetia, as the city braced itself for mass protests, Ekho Moskvy radio station reported Monday.

Ingush President Murat Zyazikov said the authorities would not allow the situation in Ingushetia to destabilize, Interfax reported.

However, the Government is denying his detention:

Ingushetia’s Interior Ministry has denied reports alleging that leader of the Akhki-Yurt socio-political movement Boris Arsamakov has been arrested.

Earlier, some media reported that Arsamakov was arrested in Nazran.

“There is no person under the surname of Arsamakov on the list of those who were arrested or held in preliminary detention centers on Ingush territory on Monday,” a source in the Ingush Interior Ministry told Interfax.