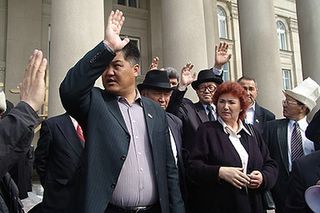 Government Officials on Steps of Parliament in Bishkek.

Twenty deputies from Kyrgyzstan’s Legislative Assembly, the lower house of parliament, met on the steps of Parliament, yesterday, criticizing the recent parliamentary elections and calling for early presidential elections.

The 20 opposition deputies released a statement that said authorities had violated the law, used their power to exclude opposition candidates from participating in elections, pressured voters and interfered with the media.

Opposition member Alvetina Pronenko read the statement outside the parliament building in Bishkek: “We believe that the president who has publicly spoken in favor of fair elections but at the same time has helped disrupt the elections and failed public confidence in the election process and its outcome, who has deceived his people, should no longer be the leader of the country.” 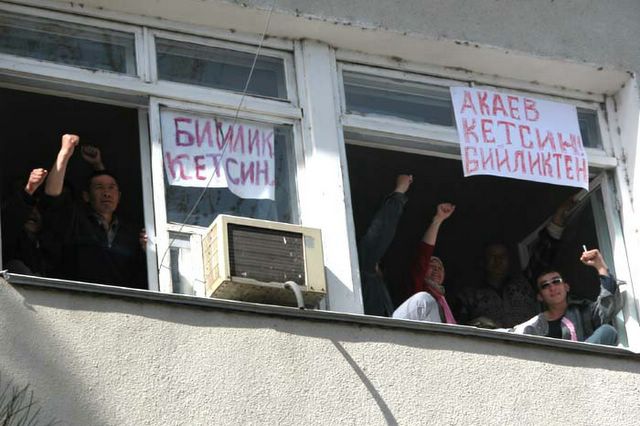 Alexander Kynev, a Russian political scientist, maintained that Akayev’s cost of ensuring his desired legislative election outcome is prohibitive, primarily because the process alienated many within the president’s administration. The president has ignored the interests of a considerable segment of Kyrgyzstan’s political establishment by promoting the candidacies of close friends and relatives, Kynev suggested. 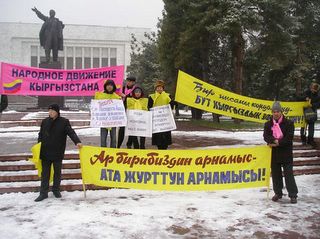 Beneath the Lenin Statue in a January Protest.

“The political aspirations of Mairam [Akayev’s wife] and his children … actually pushes towards the opposition many those [members of the elite] who had previously been absolutely loyal to Akayev’s clan,” Kynev said. “Powerful people with plentiful resources may, in the near future, feel compelled to enter into an alliance with the opposition. If this occurs, the opposition’s opportunities [to come to power] will grow.” 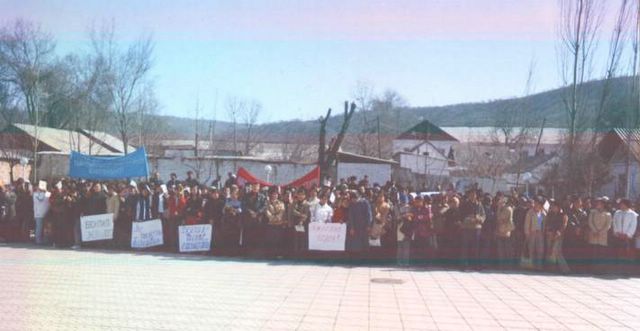 Protesters Pause for a Picture.

During the run-up to February 27 election, observers believed Akayev had a plan in place under which he would use a strong pro-presidential majority in the new parliament to either rewrite the constitution to enable him to run for another term, or to carefully manage a transition of power to a hand-picked successor. Under the present circumstances, several political observers said, Akayev will likely find it difficult to remain in power – regardless of the March 13 results. 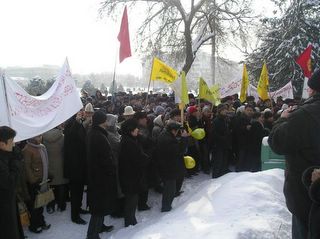 Gathering Support in Bishkek in a January protest.

Between the two rounds of voting, opposition protests in southern and eastern regions have gained strength. (most photos from Kel Kel)

**The second round of voting is this Sunday, March 13th.**

Update: (8:46 PM) The “Great One”, Instapundit, is giving the protesters their due for picketing in the snow!

Update: (11:02) The expert on Central Asian affairs, Nathan Hamm, from “The Argus” was kind enough to help out with these Kel Kel photos. Apparently, the temperatures have warmed since this January rally in Bishkek (high 40’s, mid 50’s). I stand corrected. Thanks, Nathan, for your expertise! I have now updated the photo selection and labeled which are from a snowy January protest.

Update: Publius Pundit , who is the commentary leader on world democracy has a link up to this post. He also has a great roundup on Lebanon as noted above.