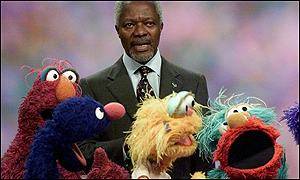 A New Career for Kofi?

The report is out and no surprise that the MSM Goes Light on Hero Kofi:

The report obtained by The Associated Press accused Annan’s son, Kojo, and the company, Cotecna Inspection S.A., of trying to conceal their relationship after the contract was in place. It also criticized the U.N. chief for not determining the exact nature of his son’s relationship with the firm.

The report found that Kojo Annan was not forthcoming with either his father or the committee and accused him of consistently trying to hide the nature of his relationship with Cotecna.

It said there still were “significant questions” about Kojo Annan’s business dealings with respect to the program, and an investigation was continuing.

In a bid to curry favor and end sanctions, Saddam allegedly gave former government officials, activists, journalists and U.N. officials vouchers for Iraqi oil that could then be resold at a profit. U.S. congressional investigators say Saddam’s regime may have illegally made more than $21 billion by cheating the program and other sanctions-busting schemes.