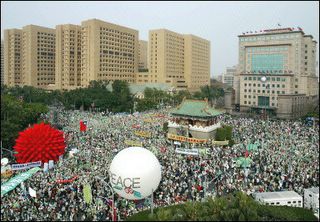 Sending a Message from Taiwan

From the New York Times:

Hundreds of thousands of Taiwanese marched on Saturday afternoon to denounce Beijing in one of the largest political demonstrations ever here, the clearest sign yet of how China’s antisecession legislation has poisoned relations across the Taiwan Strait.

The size of the demonstration showed how much the political landscape has changed since the Communist Party-controlled National People’s Congress in Beijing approved a law on March 14 calling for the use of “nonpeaceful means” to halt any Taiwanese attempt to declare independence from the mainland. Even some supporters of the opposition Nationalist Party here, which backs closer relations with the mainland, joined the march, although the party’s leaders did not.

Not all Taiwanese were excited about the protest, warning their countrymen of the escalating tension:

“Taiwan independence will only lead Taiwan to war and drag people to disaster,” Hsu said in an open letter published on the front page of the Economic Daily News today, hours before a mass rally against China’s new anti-secession law.

Quote of the Day: from Reuters (care of Publius Pundit)…

“China has never ruled Taiwan, not even for one day, yet they treat us as part of their territory.”

Wow! Publius Pundit has a great report going on the demonstration!