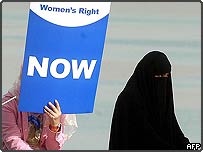 Today started with a demonstration in Morocco to free refugees held captive by Algeria. Then women rallied in Kuwait before an all male vote on women’s rights in parliament. Now, word is that Iranian students held separate protests for more freedom and democracy:

Many of the students held placards saying “Referendum Yes, Elections No” which referred to the futility of pre-selected elections in Islamic Republic and what the people of Iran really want, a referendum for the drafting of a new constitution that is compatible with the Universal Declaration of Human Rights and all its associated covenants.

The proceedings ended without a single display of support for Dr. Moein’s candidacy.

In another university in Mashad, North East Iran, the students turned the Student Publications Ceremony Day to a demonstration against the Islamic Republic and even kicked out president Khatami’s Health Minister from the ceremony. More than a thousand students took part in the protest and took control of the podium for more than an hour, exprerssing similar demands to the students in Isfahan..

Islamic Republic News Agency, ILNA reported the incident and quoted the angry Health Minister, Pezeshkian as saying “These were not real students, they say they want democracy and yet they disrupted the ceremony and kicked me out”

Khorasan Daily, reported the incident by saying “Such disruption and controversy during a university ceremony was unprecedented.”

Update: (6:45 AM) Hang on to your burkas! Instapundit has just linked to this post!