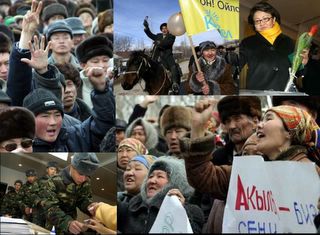 Kyrgyzstan protesters continue to alledge widespread abuses after the second round of voting in the mountainous country:

Protesters held a regional and a district governor hostage for a second day in western Kyrgyzstan on Tuesday, and thousands rallied in the south to protest alleged election fraud and demand that President Askar Akayev step down.

About 3,000 protesters have occupied a regional government building in Talas, about 250 miles west of the capital Bishkek, and held hostage for a second day on Tuesday the regional governor and the head of Bakayyt district, Interior Ministry spokesman Nurdin Batyrbekov.

The protesters, supporters of losing candidate Ravshan Jeyenbekov, demand the run-off results in Bakayyt district be thrown out because of alleged fraud.

Meanwhile, scores of opposition supporters gathered in the main square in the southern city of Jalal-Abad on Tuesday, chanting “Akayev go!”

The protesters plan on holding the governors until certain demands are met:

Since the evening of March 14, Aidaraliyev and the head of the Bakai-Atin district have been held hostage by supporters of ex-head of the State Property Committee Ravshan Zheenbekov, who failed to receive enough votes to gain a seat in parliament. The participants in the action have declared that the two officials will remain in captivity until the court passes a ruling on Zheenbekov’s suit demanding that the election returns be declared invalid, the Kyrgyz Interior Ministry’s press service told Interfax on Tuesday.

The OSCE observers said that the second round of elections showed serious shortcomings.

The Opposition has planned a meeting today in southern Kyrgyzstan.