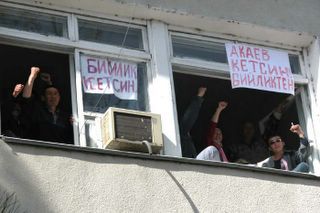 Kyrgyzstan Government officials tend to downplay the intensity of the Opposition demonstrations. But, the protests continue to build. Today word came out that the separate Opposition Parties have united. Here is the latest on the protests:

The latest reports from Ferghana.Ru correspondent Alisher Saipov with references to activists of youth organization KelKel indicate that about 10,000 protesters enraged by the first round of parliamentary election and its outcome are still blocking the regional administration in Dzhalalabad (Jalalabad). The protesters include mothers of many children, students, and senior pupils of high schools.
Particularly serious protest actions took place in Dzhalalabad, one of the largest cities in southern Kyrgyzstan, where protesters numbering hundreds overrun the regional administration.

Another protest action took place in the Nooken district about 50 kilometers west of Dzhalalabad. Approximately 3,000 supporters of Dooronbek Sadyrbayev, candidate nominated by the opposition, blocked the highway connecting Bishkek with Osh, one of the largest cities in southern Kyrgyzstan. Once again, the protesters demanded resignation of the local authorities and annulment of the parliamentary election.

Ferghana.Ru correspondent Alisher Saipov reports that supporters of ex-candidate Arap Tolonov have been protesting in front of the district administration in the town of Karasuu (Osh region) for a week. They demand annulment of the election that took place on February 27, 2005, when Tolonov was defeated by his rival Baiysh Yusupov, activist of the pro-government Alga, Kyrgyzstan. Numbering between 600 and 800 people, the protesters claim that the outcome of the election in some constituencies was rigged in Yusupov’s favor.

…Most protesters are ordinary peasants. Many of them are Uzbeks even though Tolonov himself is a Kyrgyz. The protesters are convinced that Yusupov literally bought his way into the parliament. Participants of the rally set up yurtas (tents) and trestle-beds in front of the district administration. They remain there day and night.

Mr. Bakiev said the council’s main goal would be assisting in carrying out the basic demands of the people opposing the results of the first round of parliamentary elections on February 27.

Mr. Bakiev admitted that he and other oppositionists did not know that such an organ would be established, saying the decision was prompted by the emergency parliamentary session that oppositionists hoped to convene on March 10, but failed for lack of quorum. Out of the 105 deputies from both chambers of parliament, only 20 turned up.

According to the organizers, every prominent oppositionist, many ex-candidates not reaching the second round of elections and regional representatives have joined the organization.

The 20 opposition deputies released a statement that said authorities had violated the law, used their power to exclude opposition candidates from participating in elections, pressured voters and interfered with the media.

Opposition member Alvetina Pronenko read the statement outside the parliament building in Bishkek: “We believe that the president who has publicly spoken in favor of fair elections but at the same time has helped disrupt the elections and failed public confidence in the election process and its outcome, who has deceived his people, should no longer be the leader of the country.”