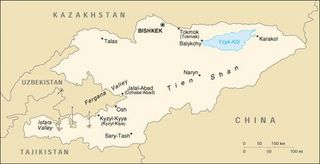 Is Kyrgyzstan Another Link in the Chain of Political Change?

US joins UN and others to stress negotiations and calm in Kyrgyzstan:

The US Embassy joined the Organization for Security and Cooperation in Europe in calling for calm and negotiations. “The [US] Embassy urges both the demonstrators and the government to resolve differences peacefully and with respect for the rule of law,” said a statement issued March 21. An OSCE statement issued the previous day called for an immediate dialogue.

While dodging dialogue, Akayev appeared to be probing for ways to slow the opposition’s momentum. On March 21, the president sought to address a central complaint of the protest movement, meeting with the head of the country’s Central Election Commission and Supreme Court and ordering an investigation into alleged voting irregularities connected with the recent parliamentary election.

Some political observers believe that Akayev’s call for an election investigation may be coming too late to mollify protesters. In recent days, demonstrators’ demands for Akayev’s resignation have intensified. Indeed, the fast pace of events in southern Kyrgyzstan — where anti-government protesters are quickly establishing an alternate authority dubbed People’s Power — seems to be drastically reducing the president’s room for maneuver.

The BBC explains one reason why events in Kyrgyzstan are so important:

“Kyrgyzstan has its chunk of the Fergana valley [shared with Uzbekistan and Tajikistan], the most densely populated and poor part of Central Asia, which is also known as the hotbed of Islamic fundamentalism in the region,” said Dovlat Qudrat of the BBC’s Central Asian Service.

The authorities of Kyrgyzstan agree to negotiations but the opposition does not have anyone to negotiate with: the president is not available.

As soon as the first suspicions that Askar Akayev was abroad appeared (and the president has not addressed the nation yet), general public began waiting for the Navruz – the day when the national leader always appears in public. It did not happen yesterday, when the events in the Dzhalalabad region were under way, or today.

All of that enables the opposition to maintain that the president fled the country.

Also- Tajikistan has tightened control of its border with Kyrgyzstan as the situation has deteriorated.

Reports of casualties can not be verified.

Is the situation irreversible? One expert thinks so:

A Central Asia expert with the Russian newspaper Vremya Novostei, Arkady Dubnov, said the situation in Kyrgyzstan was irreversible.

“The only question now is when the government will be changed,” he told Ekho Mosvky radio, adding that the protests were “another link” in the chain of political change sweeping through the former Soviet Union.

For great updates on the situation venture to:

Update: The “Great One”, Instapundit, has continued to follow the news from Kyrgyzstan, even before the riots! The above links have some great news for you and you can read more on the events in Kyrgyzstan here and here.