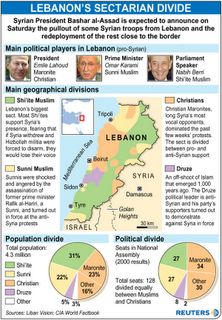 “You can tell by a soldier’s eyes, their true stands”

The party in Beirut continues in Martyr’s Square. But, moods are not so light in Damascus where President Assad addressed his Syrian Parliament today. Assad has his hands full just trying to survive the recent developments in Lebanon with his position intact as discussed at The Weekly Standard. In his speech to parliament Assad did not agree to withdraw all of his troops from Lebanon by May as President Bush has demanded.