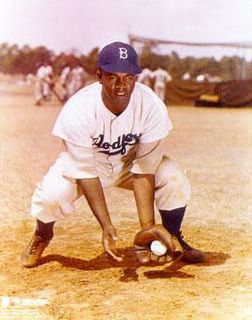 Today, the great Jackie Robinson, was honored by Congress. Jackie was the type of man that even a former Kleagle in the Klan, Democratic Senator Robert Byrd, must have been impressed with…

The US Congress rewarded late baseball legend Jackie Robinson with its highest honor in recognition of an athlete who broke racial barriers in the 1940s by becoming the first black major league player.

The Congressional Gold Medal was handed to Robinson’s widow, Rachel, at a Capitol ceremony attended by President George W. Bush.

“Through the courage of his actions, Jackie Robinson engaged America in a constructive conversation about race long before the momentous events of the 1960s,” Kerry said.

“He stood up to bigotry with dignity and inspired our country,” the senator said.

Nice to see Kerry back in the game since his wobbily last season.