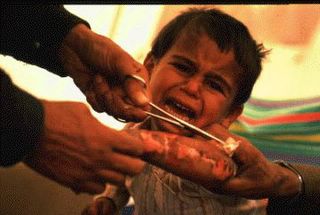 From Kurdo:
Every March, mixed feelings of joy and sorrow fills the skies of Kurdistan. From the first few days of March up to the middle of the month, there are celeberations of the anniversary of the 1991 uprising which was a begining for self-rule and freedom.

Then comes 16th of March, the Wednesday, 16th of March 1988 where Halabja was chemically and barbarically attacked.

Come and look in the faces of their survivors.

Come and see how a peaceful village was transferred by evil into a hell.

And thank God that Iraq is now free.

“The new generations in Halabja are a generation of mutated children. They don’t want movies about 17 years ago (the movies were needed then not now), they want support for new clinical research centers to help them with their current problems.”
-Kurdo