"Do Not Stand At My Grave and Weep" 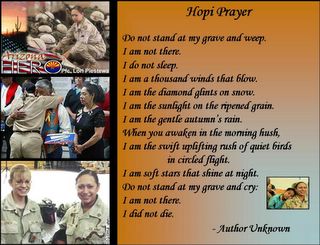 Lori Piestewa, Mother of Two Children, and the First Female Casualty in the Iraq War. (Please click on photo to enlarge)

It has been two years since the start of the Iraq War and so it is fitting this weekend to remember those who who have sacrificed so much for this great country.

Shortly after the start of the Iraq War, Lori Piestewa from Tuba City, Arizona, was moving supplies behind the front lines. In the dark Iraqi night her convoy was ambushed after making a wrong turn in the desert. Lori Piestewa, a Hopi Indian, was killed near Nasiriyah on March 23, 2003. She was assigned to the 507th Maintenance Company, from Fort Bliss, Texas. Lori, a close friend of Private Jessica Lynch, was the first female casualty of the Iraq War and believed to be the first Native American woman ever killed in combat. Piestewa fought to give others in her unit time to escape an ambush:

More than 400 people turned out on Memorial Day to salute Army Spc. Lori Piestewa, many of them bringing gifts, songs they’ve written and other tributes to the fallen Hopi soldier’s family.

The tributes came as a Pentagon official for the first time publicly confirmed that Piestewa, in fact, fought back courageously as her unit was ambushed in southern Iraq on March 23.

“She drew her weapon and fought and did it with courage and honor,” Shirley Martinez, deputy assistant Air Force secretary for equal opportunity, said at a ceremony Monday at the Women in Military Service for America Memorial at Arlington National Cemetery.

In May 2003 an Arizona mountain was appropriately renamed “Piestewa Peak” :

A mountain in Phoenix has been changed from Squaw Peak to Piestewa Peak to honor her and to erase from the mountain’s name a word that is profoundly demeaning to Native American women. And the name of Squaw Peak Freeway was changed to Piestewa Freeway.

The new names are gloriously appropriate tributes to the Hopi Indian woman from Tuba City, Ariz.

Let us cherish the memory of Lori and all of those heroes who have sacrificed their lives for the cause of Freedom.

(I heard the “Hopi Prayer” above for the first time at my fathers gravesite earlier this year at his funeral. I asked my sister who read this poem where she got it. My sister who taught on the Tuba City Reservation in Arizona for many years explained that her friends were the Piestewa’s and that my nephew grew up with Lori. The Piestewa Family sent out a card including this prayer on the anniversary of Lori’s death. Lori Piestewa- Rest in Peace.)