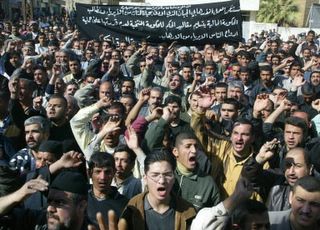 In the aftermath of the Hilla terrorist bombing, a demonstration was organized in the streets of the troubled Iraqi town as the Daily Star reported:

Iraqis have become increasingly vocal in their criticism of the insurgency, even staging a rare public demonstration condemning militants as terrorists after a deadly car bombing. While it may be too early to say public opinion has shifted, one thing is clear: Many Iraqis have grown tired of two years of constant insecurity, and some are directing their anger at insurgents for the first time.

“I demand that they be put in the zoo along with the other scavengers, because that is where they belong,” says one Mosul resident whose brother was killed in a recent attack.

Hammorabi is wondering why the western media is not reporting that these Hilla demonstrations continue daily:

In Hilla there is thousands of demonstration every day against the terrorist attack which killed more than 150 Iraqis. It is so surprising that the media are not covering it. The people of Hilla threatened to go into civil disobedience if their conditions about punishing the negligent and bring the criminals for justice is not met.

The New York Times(?) did report on the demonstrations on Sunday:

The raids came after several days of demonstrations in Hilla, 60 miles south of Baghdad, with hundreds of residents crowding the streets to demand better protection and punishment for those who carried out the attacks. Another demonstration took place today.

However, the story has generally been ignored as Hammorabi suggests. Even a Reuters story today mentions the Hilla bombing but makes no mention of the demonstrations.