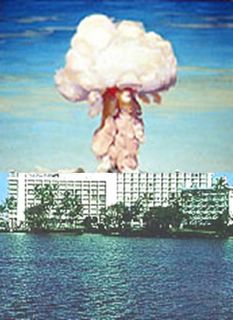 The State of Hawaii accidentally posted a draft copy of a confidential Homeland Security report that catalogues ways terrorists might strike in the United States:

The report was deleted from Hawaii’s site late Tuesday night. The Department of Homeland Security initially believed other states also may have linked to the report on their Web sites, but a further review Wednesday showed that not to be the case, said spokesman Brian Roehrkasse.

Homeland Security Secretary Michael Chertoff said it was a mistake to post confidential report on its Web site, but the department will continue to communicate openly with state and local authorities about potential terror threats…

…Besides identifying possible types of attacks, the report also estimates how many deaths and amount of economic damage the attacks would cause.