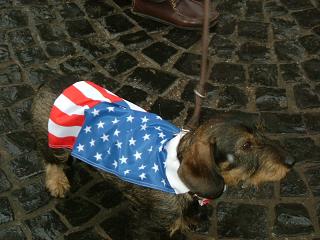 But, They Will Bark!

Some German Pro-Bush supporters braved the cold and the moonbats to show support for President Bush yesterday. His trip has many of the Germans confused including President Shroeder. It’s hard to argue with success. And, you have to wonder how it feels to be on the wrong side of history. Maybe Chirac and Shroeder will come out with a book some day! The lefty Germans seemed to have lost their oomph. There just wasn’t as much papier-mache on the streets yesterday as usual.

…Their position is lonely but not hopeless, Mr. Feulner says. “They remind me of conservatives in Washington in the 1970s,” Mr. Feulner says. “Having been one when that was not a popular position, I don’t underestimate the challenges they face. But you win converts, one by one.”