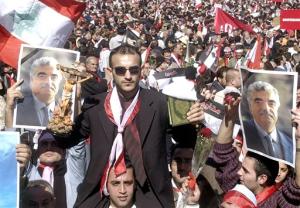 A Crucifix and the Quran

Don’t look now but another democracy may be in the taking root in the Mideast.

A protestor carries a Quran and a Crucifix as others hold Lebanese flags and portraits of the former Prime Minister Rafik Hariri near the site of last weeks explosion in Beirut, Lebanon Monday Feb. 21, 2005. Thousands of opposition supporters shouted insults against Syria and demanded the resignation of their pro-Syrian government, as they marked a week since the assassination of Hariri.

In a society with a history of religious confrontations, the Christians, Muslim, and Druse are joining peacefully to rid the country of their Syrian Occupiers.