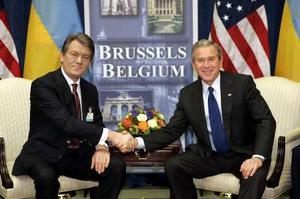 U.S. President George W. Bush shakes hands with Ukrainian President Viktor Yushchenko at NATO headquarters in Brussels, February 22, 2005. Yushckenko was invited to a meeting of the NATO-Ukraine Commission on Tuesday, as heads of state and government from 26 NATO countries met for a discussion on transatlantic issues at the highest level.

Mr Yushchenko said the regime which had been in power for the past 14 years was now into its last days and the world had seen a “different country”.

“Now every corner of the world knows Ukraine,” he said.

And today, every corner of the world saw the workings of the Bush Doctrine.

President Yushchenko already has his own connection to Washington. Mrs. Yushchenko worked for the first President Bush in the Treasury Department.

Update: A big thank you to Powerline for linking to this awesome shot that was missed by the MSM.