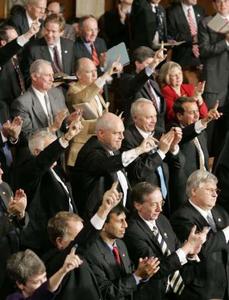 Republican Congressmen and Women (including Bobby Jindal in red tie) decided to show their continued support to the future of Iraq and and to the President last night by dipping their fingers in blue ink for the State of the Union Address. Unlike the democrats who had continued to cast doubt on the Iraqi elections up to election day, see Ann Coulter, Republicans have become the party of hope for the oppressed and down trodden everywhere. Nothing made this more clear than the the unforgettable “Hug” that the world witnessed last night.