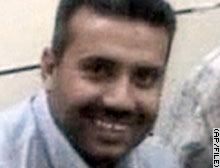 Even after the populace gave them a resounding “No Faith” vote in the highly successful elections, the terrorists in Iraq continue to reek havoc on the innocent people. The “changing hearts and minds one terrorist attack at a time” did not help them before the elections and it won’t help them after the elections, either. Especially when they are targeting cameramen and their children…

Masked gunmen killed an Al-Hurra television correspondent and his 3-year-old son on Wednesday in the southern city of Basra, an Iraqi army official said.

The gunmen sprayed journalist Abdul Hussein Khazaal with bullets in the al-Maaqal neighborhood as he stood outside his house, the official said. Khazaal was standing near a car at the time, waiting for bodyguards to retrieve something inside the house.

Jim Hoft
Jim Hoft is the founder and editor of The Gateway Pundit, one of the top conservative news outlets in America. Jim was awarded the Reed Irvine Accuracy in Media Award in 2013 and is the proud recipient of the Breitbart Award for Excellence in Online Journalism from the Americans for Prosperity Foundation in May 2016.
"They'll Do Anything to Cheat - These People Are Sick!" -- PRESIDENT TRUMP Trashes Cheating Democrats and Their Stashed Suitcases of Ballots at Valdosta Rally (VIDEO)
Beautiful Melania Trump Speaks to FIRED UP CROWD in Valdosta, Georgia (VIDEO)
PRESIDENT TRUMP HOLDS FIRST RALLY SINCE ELECTION in Valdosta, Georgia -- 7 PM ET -- RSBN LIVE STREAM VIDEO
Breaking: GEORGE SOROS Appoints Lord Mark Malloch Brown - The Former President of Smartmatic - to Lead Open Society Foundation
China Whistleblower with Royal Ancestry Steps Forward - Reveals Video, Photos of Alleged Chinese Counterfeit Ballot Printing Operations of US Ballots for MS, FL and NC
See more...