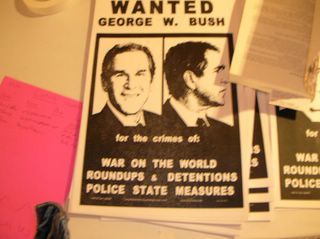 According to a Sunday article from the St. Louis Post Dispatch:

Peace activists from across the country descended Saturday on downtown St. Louis, setting aside their particular causes to weigh in on the best way for the United States to exit Iraq.

The three-day event, which continues through Monday at the Millennium Hotel, is billed by organizers as the largest representation of peace and justice groups ever assembled. On Saturday morning, 450 people had registered, representing groups from 36 states and Canada.

United for Peace and Justice, a New York-based anti-war coalition, was formed in October 2002 by various activists groups concerned about what was then a pending war in Iraq.

What the Post will not tell you is the type of material that was distributed during the conference at the Millinium Hotel in St. Louis this weekend. The conference included videos on “Bush ties with nazis”, “wanted” pictures of George W. Bush, and fake money advertising the “Bush was behind 9-11” conspiracy.

The coalition could not stop the war but now is working to find a successful way to end the occupation. The group hopes that after a series of workshops at the event here, it will have a set of priorities to guide the coalition toward a proposed solution. President George W. Bush has not set a timetable for a complete withdrawal of U.S. troops.

You can only imagine what strategy they must have come up with. The Post-Dispatch also makes note of the headliners brought in for the event:

The event continued through Sunday evening. Incense, bumper stickers, 9-11 Conspiracy videos, nap sacks, and cookies were being sold in the hallways.