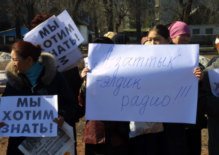 “A Fair Vote is a Bright Future”

The “Lemon Revolution” now appears to be in progress. Word from Radio Free Europe is that the opposition is staging a demonstration in the capital city of Bishkek, Kyrgyzstan (map here)…

The Kyrgyz opposition held demonstrations in central Bishkek and in the south of the country today ahead of the first preliminary results to be released by the Central Election Commission from yesterday’s parliamentary elections. Some 500 people in the capital holding yellow and pink signs protested against alleged election fraud as well as the harassment of media outlets such as the daily “Moya Stolitsa Noviosti” and RFE/RL’s Radio Azattyk. Several thousand more rallied in southern regions…

…Harassment of the independent media before the elections was the other issue that demonstrators spoke about. They particularly protested against the lawsuit that Kyrgyz President Akaev filed against the independent “Moya Stolitsa Noviosti” newspaper, which wrote about the business and property holdings that the Akaev family allegedly possess.

Demonstrators also said post election coverage of the voting on national TV and radio stations was limited only to reports from the Central Election Commission.

Rallies are also being held in the Aravan Raion of the Osh region. Different sources report anywhere from 1,500 to 5,000 people taking part in the protests. In Nooken Raion, within the Jalal-Abad region, some 1,000 people were also rallying.

The leader of the opposition, Roza Otunbaeva, in an interview on AKIpress says that Kyrgyzstan is ready for a revolution:

“We speak about peace, quiet and constitutional transfer of authority in our republic. Revolution associated with blood and robbery, was not neither in Tbilisi, nor in Kiev. And it won’t be here. We, opposition, consider that the authority has no right to ignore the constitution, sit in their armchairs termless and prepare posts for their descendants. We shall not allow to build a monarchy in our civilized country.”

Update: Alexander K. McClure another of the great Polipundit Bloggers has linked to this story.