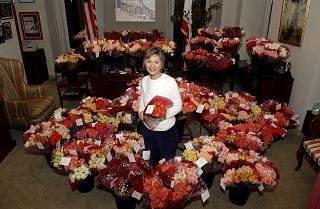 Barbara Boxer had a lovely Valentines Day as many of the extraterrestrials sent her roses for the good(?) job she did in questioning Condoleezza Rice, interrupting her, calling her a liar… and then outdoing herself against Alberto Gonzales and voting against his nomination as the first Hispanic Attorney General. This, of course, after she voted against approving the 5 million vote difference in the Bush win. The more she is in the spotlight, the more moderate democrats become Republicans. I am wondering how many Republicans sent her flowers? Do you think she’d notice if a dozen were from 1600 Pennsylvania Avenue?