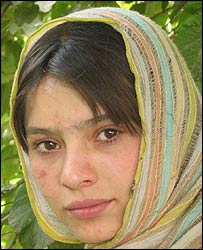 The discovery of Marina Gulbahari, 14, who has become the star of a major international film, reads like the script of a Hollywood movie.

Marina, then 11, was begging outside a hotel in Kabul when she was spotted by Afghan film director Sediq Barmak.

“Barmak asked me to take part in a public poetry recital,” she recalled, sitting in an unheated hotel in the city centre. “It was a very sentimental piece, very moving and halfway through, I found myself thinking about two of my elder sisters who were killed by a rocket during the Soviet invasion.

“It was very emotional. I lost control and tears started rolling down my cheeks. I think it was because of this that Barmak offered me the part.”

Marina went on to star in “Osama”, a film in which she portrays a 12-year-old girl forced to masquerade as a boy called Osama, in order to work to save her widowed mother and grandmother from starvation, when women under the Taleban were banned from working and even appearing outside their home unless accompanied by a male member of the family.

The film went on to win numerous international awards in 2003, including three at the Cannes Film Festival and a Golden Globe as the best foreign-language entry.

Osama’s success also meant that Marina can afford to pay for her education and support her family.

Her decision to pursue an acting career is a brave one in a country still living in the shadow of the Taleban-era.

Afghan president Hamed Karzai has invited her to the presidential palace and she also received an invitation from US First Lady Laura Bush to visit America.