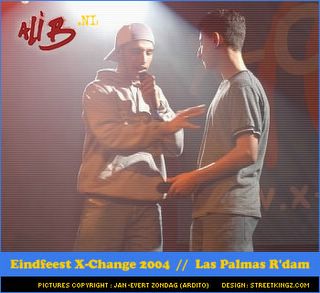 New sensation Dutch Moroccan rapper Ali B has taken Holland by storm. He is apparently seen everywhere. According to the Dutch report:

Years back he said angrily in an interview: “for me their counts only one thing: ISLAM, ISLAM, ISLAM”. But that is all the past, he has changed they say. Just as he does not terrorize his neighbor hood any more with his two pit bull fight dogs. But why was he singing on that War child concert only about “Chechen, Palestine, Kashmir” and did not mention other area’s?

…a 43 year old woman had to stop on the Derde Oosterpark street. But when she stopped, two young boys on a scooter open a door of her car and grabbed her bag. Apparently this was not a normal cowardly Dutch, she put the car in reverse and went in hot pursuit of the two thieves. But the pursuit resulted in the death of one of the criminals when she crashed on the motor cycle. The other criminal fled the scene.

The young criminal that died was an 19 year old Moroccan.