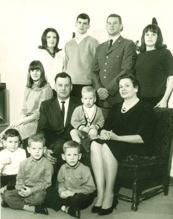 I’ll be Saying Goodbye to My Father This Week

Norman was born on May 23rd, 1923 in Omaha, Nebraska. Norman was a veteran of the Second World War. He leaves behind a wife of 60 years, six sons, and three daughters. Norman was a member of Corpus Christi Church, American Legion Post 130, where he served as past commander, and the local chapter of the American Society of Refrigeration Engineers. Norman passed on Friday, February, 11th, 2005 after a long battle with Alzheimer’s Disease.

The above picture was taken in January 1966 when my older brother was home on leave from the service.

Jim Hoft
Jim Hoft is the founder and editor of The Gateway Pundit, one of the top conservative news outlets in America. Jim was awarded the Reed Irvine Accuracy in Media Award in 2013 and is the proud recipient of the Breitbart Award for Excellence in Online Journalism from the Americans for Prosperity Foundation in May 2016.
Dominion Employees Are Hiding at Home and Working Remotely -- Not a Peep from Trump-Hating Executive Eric Coomer
WOW! Elections Court Filing: Foreign Agents of Agressor Nations Had Access to US Voter Lists and Had Done So Recently
HUGE! Georgia Election Lawsuit: Dominion Software was Accessed by Chinese and Iranian Agents to Manipulate Election
Twitter Now Showing "Unsafe Link" Warning Messages for Sidney Powell's Website -- Blocks Americans from Seeing MASSIVE Voter Fraud
Happy Thanksgiving 2020
See more...