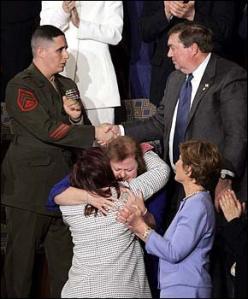 One of the big differences between liberals and conservatives is that the elite crowd not only in the US but worldwide love to take off and run with a good conspiracy theory. Put a movie together and piece together some disjointed remarks and appearances, do a little cut and pasting, and Ta-Dah!… George Bush and Osama are buddies and GW was counting the days until 9-11 so that he could make some quick cash.

On the other hand you have the conservatives who may feel the same disgust for any liberal that gets into power but do their best to keep their feet planted in reality. Take the Clinton affair(s): The conservatives may have believed that Bill was fooling around (he did), that he lied under oath (he did) that this was a crime (it is). But, when an article came out that Bill and Hill went to some séance in Haiti with the dictator Aristide, it never gained much traction in conservative circles.

Since the US and Allied forces went into Iraq to dispose of Saddam the left has gone absolutely berserk. The non-stop attacks have been way over the top in their meanness and viciousness. Even the “neutral” UN has thrown daggers at the present administration.

Maybe this is because George W. Bush took them out on the carpet and challenged them to back up their proposals or end up like the defunct “League of Nations” in the “nice thought but didn’t work” heap of history. George Bush stood by his words and took action and that didn’t too much please Kofi Annan and the other socialites at the New York Boys Club.

Kofi went from a continued and predictable “non-stance” or “wait and see” attitude on Iraq, the same stance that saw genocide in Rwanda, to a vicious and underhanded attempt to embarrass and bring down the American Administration that dared to show some backbone and integrity when he could not. Annan ridiculed the US publicly after the Abu Ghraib scandal. He went on record to proclaim that the War in Iraq was illegal to the delight of the leftists and enemies to the United States everywhere. Time and again Kofi did his best to bring down the Bush Administration even commenting on the supposedly “missing” weapons at an Iraqi weapons site days before the US election.

Meanwhile, the US discovered through documents found in Iraq and other sources that the UN, France, Russia and some Arab regimes have not been on the up and up in regards to the numerous contracts in the Oil for Food program. Detractors of the war were making some big bucks while the soldiers of Saddam were making some mass graves. Even Kofi’s son Kojo was in on the action and getting paid up until early last year long after he quit the firm (or was released) that was connected to the Oil for Food program. Suddenly the media darling Kofi found his back on the ropes.

And, despite the best attempts of the leftists, the Hollywood elites, the Europeans, and others Bush is still sleeping in the White House. Americans were more impressed with a few truthful ads by a large group of Vietnam veterans than they were with the overwhelming amount of fiction that the left delivered. And even worse news for the leftists and the UN is that the investigation into the Oil for Food scandal is heating up. Kofi has suddenly been put on defense and is probably getting a little edgy and maybe even a little worried about his position, as he should.

To top it off this week as George W. Bush gave his State of the Union address this week and in a brilliant move invited a young Iraqi woman who just came from the first free democratic elections in Iraq since the country stopped producing mass graves. A hat tip to the official who decided to invite this young woman. You see, the young woman, Safia al-Souhail is a leading political figure in post-Saddam Iraq. And, Safia’s own father was assassinated by thugs during Saddam’s tyrannical rule. And the man who did it she proclaims was given an “Oil for Food” voucher as a present for this murder. She had just voted in a free Iraqi election and was waving her blue finger of thanks to the American public for their heroic efforts. A very good week for this young Iraqi hero.

Update: A big thank you to Lorie and the Great Polipundit for linking to this post.

-Safia’s father was assassinated in their home when they invited whom they thought was a friend (paid by Saddam with the Oil for Food vouchers for his act). Safia continued the fight for liberty her father had died for.

-Meanwhile, Kofi, along with his son and a few discreditable others, went as ‘friends’ into other ‘homes’ – they lined their own pockets while trying to appear as though they were ‘helping’ the needy and destitute. They really only helped themselves and prompt Saddam to more evil toward the Iraqi people.