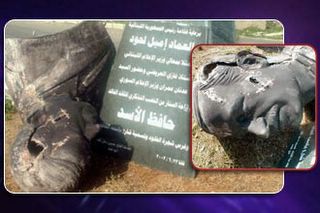 “Assad” Statue Comes Down in “Lebanon”

Get this… a statue of the late “Syrian” President Assad was torn down in “Lebanon” this past week.

Meanwhile, Red and White protestors marched in Beirut yesterday after spending the night in Martyr’s Square…

Lebanese opposition supporters have held a rally in Beirut demanding the resignation of the government, in defiance of a ban on demonstrations.
About 10,000 protesters – many of whom waved Lebanese flags – also called on Syria to withdraw from Lebanon.

The demonstrators blame the government and its Syrian backers for the recent killing of former PM Rafik Hariri.

The rally comes as parliament meets to discuss an opposition-sponsored motion of no-confidence in the cabinet.

Update: This is just amazing! How quickly the walls of oppression are falling!