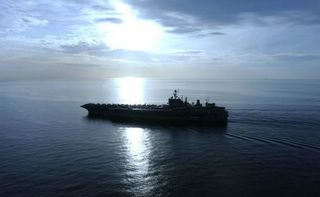 A Tribute to Our Military

This was a comment posted by Dale, a devoted reader, and was so moving that I wanted to post it and share it with all of you…

When I served our country, we had a draft. I volunteered (so to say). I was ‘invited’ to be a part of a little group via DIA, in Nam back in the 60s. And, as a female, it made it all the more provocative to consider this.

Times were interesting. The aftermath, for many, excruciating in varying ways. Those strong enough, and there are many, to see it through, just got stronger – and, as time went, more focused. To delve into this more would take up too much space, but suffice it to say, those of us who volunteered, WERE in it for reasons of belief in the fight.

Sometimes, such a fight is NOT well understood. Along the way in the past couple hundred years, our people seem to have pushed back what were are about and how we got here. I think to some, especially on the left, they do this because they do not have a core belief or know how to get it. Perhaps guilt (an easy catch 22) has made them bereft of thought.

In looking at the current warrior, I take pride in seeing that we are slowly beginning to see the absolute need to know our own origins as a nation and why we need to fight for it even though it may be several thousand miles away. Some will never get it, sad to say.

When one is ‘in country’, the nights can be long, fearful, and lonely (even though, perhaps, surrounded by our buds). We still carry our deep, personal thoughts that we cannot put words to, but we KNOW the others have them in their souls as well. Yes, there are the little pesky things like survival, but we continue on the way given us by our Creator, our belief in what He has given us, and His protection of us. If we do not make it through, we know we have been part of it and go to something bigger. This is not well understood by some either (sigh). For that matter, words are of little use in getting this concept across, for it is really something of the cosmic soul to know, and for me, that is good enough.

Conscientious objectors will always be there. Whether they can actually believe they are is another matter. Some are real. Ok. Most will have to live with the lie and excuse themselves to some crap as Kerry did in betraying us when he came home…

Thanks also to Specialist Sha’ron Evans, YN2(VS22) for the beautiful picture of the USS Harry S. Truman.