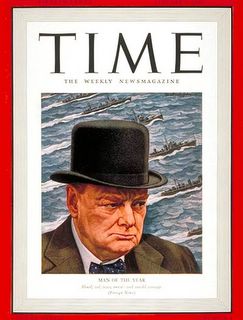 Man for the Ages

Today is the anniversary of the death of Winston Churchill one of Britain’s greatest 20th-century heroes. Churchill fought with the British Army in India and Sudan, and as a journalist was captured in South Africa where his dispatches from the Boer War first brought him to public prominence. He became a member of Parliament in 1900 and remained an MP for over 64 years. His early topsy-turvy political career earned him many enemies, but his stirring speeches, bulldog tenacity and his refusal to make peace with Adolf Hitler made him the popular choice to lead England through World War II. When Britain and its allies prevailed in 1945, Churchill’s place in history was assured. One of the 20th century’s most quotable wits, Churchill wrote a plethora of histories, biographies and memoirs. In 1953 he was awarded the Nobel Prize in Literature; he was knighted the same year. Like George W. Bush, Winston Churchill shared a love and commitment to western democracy adn freedom. And Churchill, like Bush, was not afraid to label as evil the enemy to freedom.