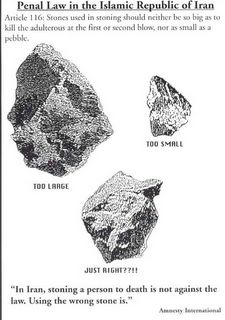 A User Friendly Guide to Stoning

Front Page magazine has a gruesome discussion this morning about the stoning practice of women in Iran:

Conservative estimates by Iranian opposition movements and various human rights organizations, such as Amnesty International and Human Rights Watch, put the number of women stoned to death in Iran since the establishment of the Islamic Republic in the neighborhood of fifty. One can only imagine the cases that have gone undetected — as many Islamic “punishments” are carried out in small and remote villages.

Women sentenced to death by stoning are buried in the ground up to their necks. Iranian law regulates the size of the stones used by the executioner crowd; stones cannot be big enough to kill the sentenced woman too quickly, as the purpose of this barbaric ritual is to inflict as much pain as possible before death. On the other hand, stones cannot be too small, as each blow must be dramatically painful…

…In a particularly gruesome execution carried out in 1993 in the city of Arak, a woman was to be stoned to death in front of her husband and two young children. After the stoning began, the woman was able to free herself from the hole in the ground, escaping death. According to Shariah laws, in such cases the woman must be let go, as her death sentence was revoked by divine intervention. Ten minutes after the failed stoning, however, the poor woman was chased down, apprehended and summarily executed anyway, by a firing squad.

I am curious when the women’s rights groups will start actually speaking up against not just the lack of rights but the inhumane way that women are treated in these barbaric regimes. Instead we here them rant about some crazy conspiracy from our own government (ex: Barbara Boxer). Maybe, the conservative critics are right and the left does not give a voice to human rights abuses as they once did.