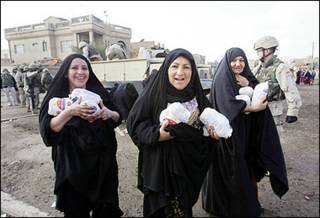 This is for the birds…

While Muqtada Al Sadr is blaming the “evil trinity” (America, Britain, and Israel) for perpetuating the bombings in Karbala, US forces are handing out frozen chickens to poor ladies in SADR city.

The director of a Detroit food bank wants to know what happened to 60 turkeys — 720 pounds of frozen birds — that his charity gave to members of U.S. Rep. John Conyers’ local staff two days before Thanksgiving to give to needy people.

Conyers’ Detroit office promised an accounting of any turkey distribution by Dec. 27, but the Gleaners Community Food Bank had received no paperwork as of Tuesday, said the charity’s director, Agostinho Fernandes.

Fernandes said he became suspicious that the turkeys didn’t get to poor people after hearing from a friend that a federal court worker had said he was offered free turkeys from a member of Conyers’ staff.