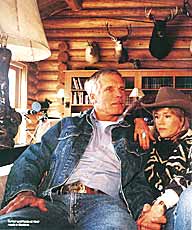 Ted Turner went off yesterday on FOX News in Las Vegas before a standing-room-only crowd at the National Association for Television Programming Executives’s opening session.

While FOX may be the largest news network [and has overtaken Turner’s CNN], it’s not the best, Turner said.

He followed up by pointing out that Adolf Hitler got the most votes when he was elected to run Germany prior to WWII. He said the network is the propaganda tool for the Bush Administration.

Uh, Ted,… for your information, Hitler never did get the most votes. He lost in March of 1932 and then again in the runoff in April of 1932. On August 2, 1934, when Hindenburg died, and the title of president was abolished. Hitler moved in and his title became Fuehrer and Reich Chancellor. (thanks Steve for the tip!)

Meanwhile…A FOXNEWS spokesperson responded: “Ted is understandably bitter having lost his ratings, his network and now his mind — we wish him well.”

Be assured that Ted tossed and turned all night.