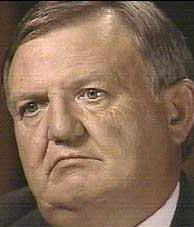 Someone needs to tell Dan Rather to look for the humor in all of this. In fact we all might get a good chuckle if we could have seen the look on Dan’s face when he went one on one with his “Unimpeachable Source”. He may have looked unimpeachable to Dan, but I wouldn’t leave a friend, let alone a young child alone with this man for more than a few minutes. According to the Wahington Post:

The man CBS News touted as the “unimpeachable source” of explosive documents about President Bush’s National Guard service turns out to be a former Guard officer with a history of self-described mental problems who has denounced Bush as a liar with “demonic personality shortcomings.”

Over the past three years, retired Lt. Col. Bill Burkett has given dozens of newspaper and television interviews accusing the president and his aides of destroying documents and stealing elections. In e-mail messages to an Internet chat group for Texas Democrats, he has also said that the “Bush team” sent “goons” to intimidate him at his ranch in Baird, Tex.

This is hardly the man that I would want to risk my whole career on, Dan. But, it’s nearly over now and we could all use a good old belly laugh. So lighten up Dan. Not only did you bet your “historic” career on this self proclaimed mental health patient but you bet your whole career that you would be able to convice America that Bill Burkett was a non-partisan… Ha! Stop it, Dan! You’re too funny! Stop!