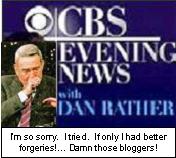 Another crappy AP article about the biggest blog discovery ever:

Four CBS News staffers were fired Monday following the release of an independent investigation that said a “myopic zeal” led to a “60 Minutes Wednesday” story about President Bush’s military service that relied on allegedly (???) forged documents.

Dan Rather, who narrated the report, announced in November that he was stepping down as anchorman of the “CBS Evening News,” but insisted the timing had nothing to do with the investigation.

Rather “asked the right questions initially, but then made the same errors of credulity and over-enthusiasm that beset many of his colleagues in regard to this segment,” top CBS executive Leslie Moonves said.

The report cited documents purported to be from one of Bush’s commanders in the Texas Air National Guard. The documents say the commander, the late Lt. Col. Jerry Killian, ordered Bush to take a medical exam and the future president. Killian also reportedly felt pressured to sugarcoat an evaluation of then 1st Lt. Bush.

Questions were quickly raised about the memo, with some document experts saying it appeared were written on a computer not invented at the time they were supposedly written.

Although the panel said it couldn’t prove conclusively the documents were forged, it said CBS News failed to authenticate them and falsely claimed an expert had done so when all he had done was authenticate one signature.

To say that the documents could not be proven as fake is ridiculous. An eight year old could have seen that the documents were not real. Although, the biased AP will not admit it, this was a huge blow to the liberal information monopoly that the left has abused for decades. The shift in information control will be seen as the real story here when future generations look back on this event in history.