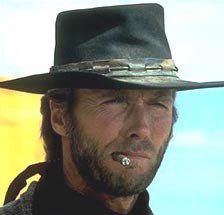 But Not Without an Invite

Good for Clint Eastwood. He let his Bad ass out and got a little Ugly with Michael Moore this week at the National Board of Review Film Awards banquet:

“Michael Moore and I actually have a lot in common – we both appreciate living in a country where there’s free expression,” Eastwood told the star-dotted crowd attending the National Board of Review awards dinner at Tavern on the Green, where Eastwood picked up a Special Filmmaking Achievement prize for “Million Dollar Baby.”

Then, the Republican-leaning actor/director advised the lefty filmmaker: “But, Michael, if you ever show up at my front door with a camera – I’ll kill you.”

The audience erupted in laughter, and Eastwood grinned dangerously.

“I mean it,” he added, provoking more guffaws.

Update: The Anti-American Moore is not getting any love from his old high school either.