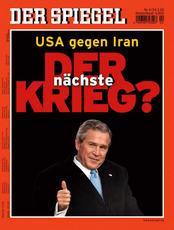 “USA against Iran- The Next War?”

“Thumbs up” to the German rag “Speigel” magazine on it’s latest Anti-Bush cover. It must have been quite annoying for the left on this continent and their leftist partners across the Atlantic to hear the words of George W. Bush this week in his Inaugural Speech. Lord, that must have freaked them out! They must have cancelled their body armor shipments to Iraq and stored the care packages out in the garage. (just in case!) Just like pretty women sell magazines in America there’s nothing like a good old “Bush the War-monger” lead story to sell some rags in Germany! Davids Medienkritik has the latest news from across the pond. It appears that the left in Europe does not too much care for (Surprise!) the “fair and balanced” FOX News Channel:

It is not enough to denounce and discredit Bush. Anyone perceived to be pro-Bush is a potential target of the “journalists” at SPIEGEL ONLINE. FOX News has long been a favorite whipping boy of the left on both sides of the Atlantic because it dares to give viewers an alternative to the patently biased reporting coming out of the US mainstream media. Because FOX News is not dominated by Democrats and Bush-opponents, it is a threat to everything that SPIEGEL ONLINE stands for and so it is imperative that they are discredited and found guilty before the German public.